Understanding Asthma and Its Triggers 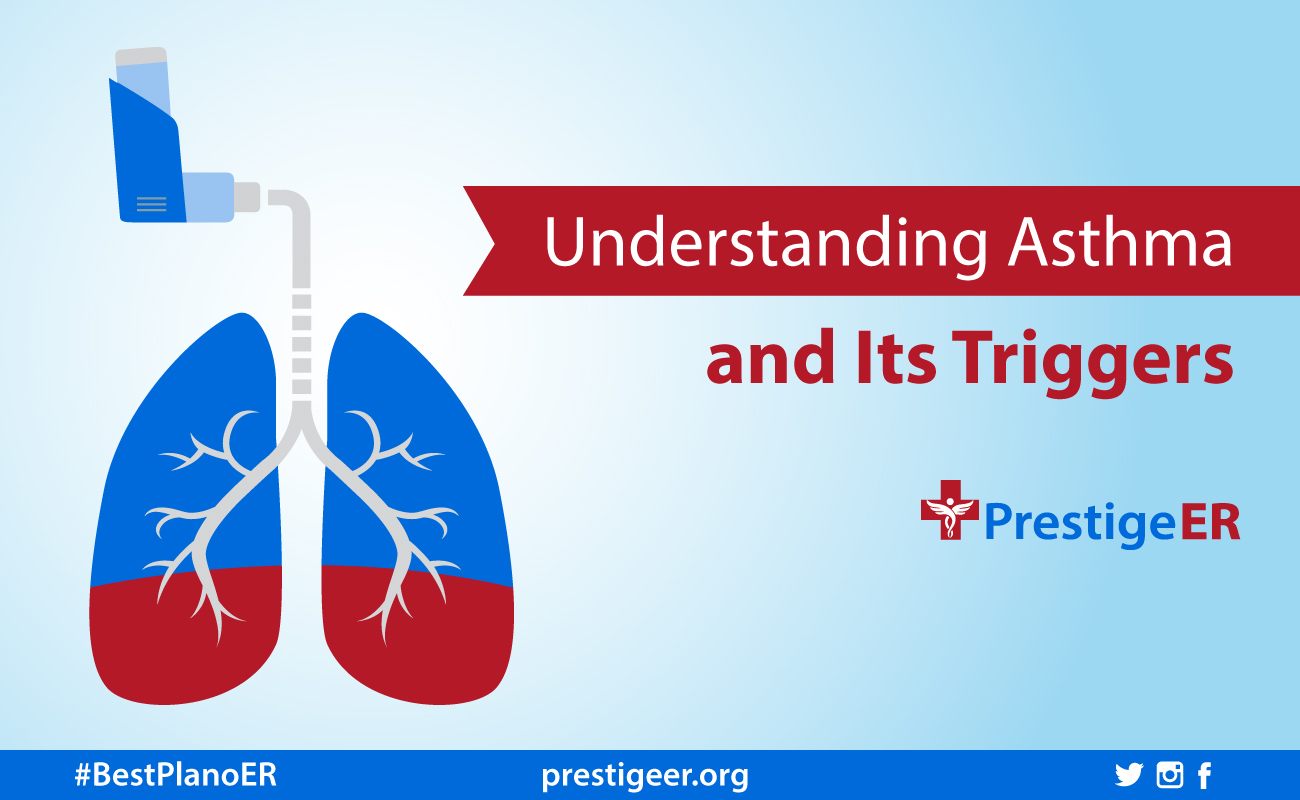 Understanding Asthma and Its Triggers

While many American’s love this time of year, for more than 26 million of us who suffer from asthma this season can be challenging.  At Prestige ER, we believe that understanding asthma is particularly vital during this time of year is our beautiful state of Texas.
We end the month of May, National Asthma Awareness Month to be well equipped to fend off any possible summer asthma attacks.

The first step to understanding asthma is to know what it is and how it works.  Asthma is a chronic disease where the inside walls of a patient’s airways become sore and swollen, this makes them extremely sensitive to certain allergens or triggers.
When airways encounter one or more of these triggers they get narrower and as a result the lungs get less oxygen, which in turn causes chest tightening, wheezing, coughing, and trouble breathing. Although this can happen at any time it is most common in the early morning or at night.

What is an Asthma Attack?

When the symptoms of asthma become more severe than usual, this is known as an asthma attack. The severity of the symptoms during an attack varies, but in extreme cases, the airways swell so much that vital organs are unable to get sufficient amounts of oxygen to operate properly and if not treated in time the person can die.

Scientists do not know what causes asthma to develop but there is some evidence that suggests that genetics play a part, this means that if a close relative has asthma you are more likely to also suffer from it.
Researchers believe that susceptibility to asthma develops very early in life, which would explain why 1 in 11 children have the condition. Some believe the susceptibility develops in the womb from the pregnant mother being exposed to cigarette smoke, allergens, and even certain foods, and children exposed to allergens or those who suffer from respiratory infections within their first three years of life are also more likely to cause asthma.

Understanding asthma symptoms is a bit challenging as they vary from one patient to another, the severity of the symptoms also changes from person to person and even between episodes, in some instances, your symptoms may be mild, and during another attack, they can be more severe.
Asthma signs include:

Asthma flare-ups are most commonly induced by inhaled substances found in our everyday environment, the most common are:

There is another set of triggers that are not linked to the environment but are rather more physical in nature, these include:

When to Seek Immediate Emergency Attention

The number one mistake asthma patients make is thinking they can control a severe attack without medical attention.
The problem is that airways can quickly swell to a point where the lungs are unable to draw-in sufficient oxygen to supply vital organs, and the patient’s condition can rapidly deteriorate increasing the risk of death.
You should come into Prestige ER if you or someone you know displays any of the following symptoms:

Prestige ER is Your #1 Choice During an Emergency.

#WeStayOPEN 24/7, through weekends & all holidays!

Prestige ER is honored to serve all the residents of Plano and surrounding cities like Frisco and Allen, we hope that you have a lovely May and have a happy and healthy June.  By better understanding asthma, you will have a greater likelihood to prevent an asthma attack. Please keep in mind that Prestige ER is Open 24/7 every day of the year, if you need us, we are here for you.
We are available 24/7 because an accident can happen at any time. Do not risk your health! Get help from the ER experts when you need it, visit us immediately on 7940 Custer Road Plano, Texas 75025.

#1 Medical Emergency Care in Plano, Near Frisco and Allen

Find the ER Specialists at prestigeer.org, We provide the Best 24 HR. Emergency Medical Services in Plano. Don’t Wait in Line for ER Care!  Don’t forget that WE STAY OPEN 24/7.
Get back on track to enjoying life, FAST! Experienced, Effective and Caring Emergency Physicians team up with the best On-Site ER care for everything from Minor to Major Injuries and Conditions.