Why Were Measles in the News? 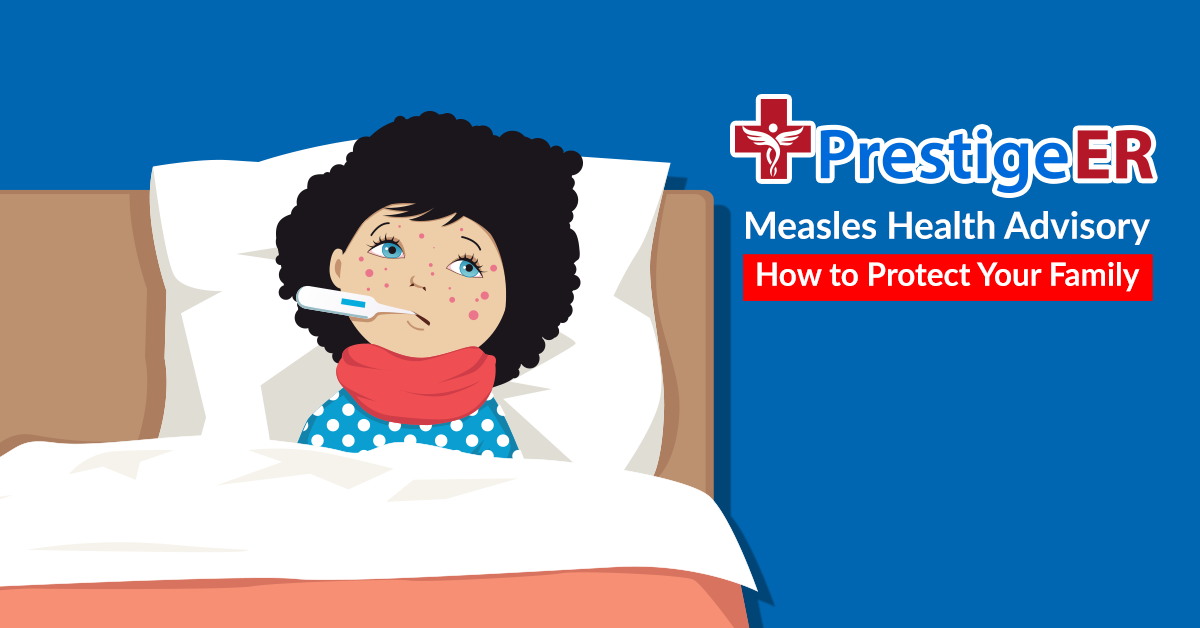 Measles in the News. The Recent Health Advisory

How to Protect Your Family

Last week, the Texas Department of State Health Services issued a Measles Outbreak Health Advisory after 6 confirmed cases of the illness were reported in Ellis County.  With the Flu Virus making headlines recently, many of us were surprised to see measles in the news.  In fact, you may be wondering why there would be a cause for such a concern.
Given the proximity of Plano to the site of the outbreak, Prestige ER is actively trying to educate the community members on how to recognize, treat and mostly prevent a measles infection.
Although measles has a low mortality rate in healthy children and adults, it poses a great threat to those who do not have proper nutrition or those with compromised immune systems and according to the World Health Organization (WHO), measles was the primary cause of death for children under the age of 5 globally.  Measles in the news is concerning due to the fact that it is not only dangerous, it is avoidable.

What is the Measles?

Measles is a viral respiratory infection, that is characterized by a widespread skin rash. The virus can become airborne when an infected individual sneezes or coughs, making it a highly contagious illness.

How Does Contagion Happen?

Direct contact with the virus is how it is spread, therefore drinking from the same glass, or sharing food with an infected person will increase the risk of infection.
The virus as mentioned before can become airborne from sneezing and coughing, and the virus can survive for several hours on surfaces, this means you can become infected even if you do not come in direct contact with the patient.
To make matters worse, infected patients become contagious 4 days of the onset of symptoms which usually start with a widespread red itchy skin rash and remain contagious up to 4 days after the onset of the symptoms. Meaning anyone can come in contact with an infected individual and not know it.

How to Recognize the Measles?

Symptoms may not manifest until after 14 days on average from the initial contact, in some individual’s symptoms may manifest in as little as 7 days, but they can manifest up to 21 days after the initial contact.
Common symptoms of the measles include widespread skin rash (red itchy bumps that typically start in the head and slowly spread to other parts of the body) in addition to the following:

Complications from The Measles

Measles can have severe complications for some patients which include:

Clearly, no one wants to hear about measles in the news as it is a particularly ugly virus.

The pharmaceutical community has not been able to come up with an antiviral medication specifically for the treatment of the measles.
The illness is easily treated at home, and symptoms typically disappear within two or three weeks. Doctors recommend the following course of home treatment:

The Key to the Prevention of Measles:  Vaccination

If we all take the necessary steps, we should not hear about measles in the news in the near future.  There is a vaccine available to prevent Measles, Mumps, and Rubella commonly known as German Measles. This vaccine is easily obtained and is very effective.
Anyone who has not been vaccinated can receive the vaccine within 72 hours of being exposed to the virus to prevent the infection from developing.
A dose of immunoglobin (a blood serum containing antibodies) can also be taken within 6 days of being exposed to the virus to help prevent infection.  Please take the time to spread this guide to better understanding measles to prevent future outbreaks.

We hope that this health advisory helps safeguard our communities from the measles and other viruses.  At Prestige ER we always advocate for prevention but are here for you in the event of a medical emergency.  We are available 24/7 because an accident or illness complication can happen at any time. Do not risk your health. Visit Prestige ER immediately on 7940 Custer Road Plano, Texas 75025.
Find the ER Specialists at prestigeer.org, We provide the Best 24 HR. Emergency Medical Services in Plano. Don’t Wait in Line for ER Care!
Get back on track to enjoying life, FAST! Experienced, Effective and Caring Emergency Physicians team up with the best On-Site ER care for everything from Minor to Major Injuries and Conditions.