Is this the Worst Flu Season Ever? 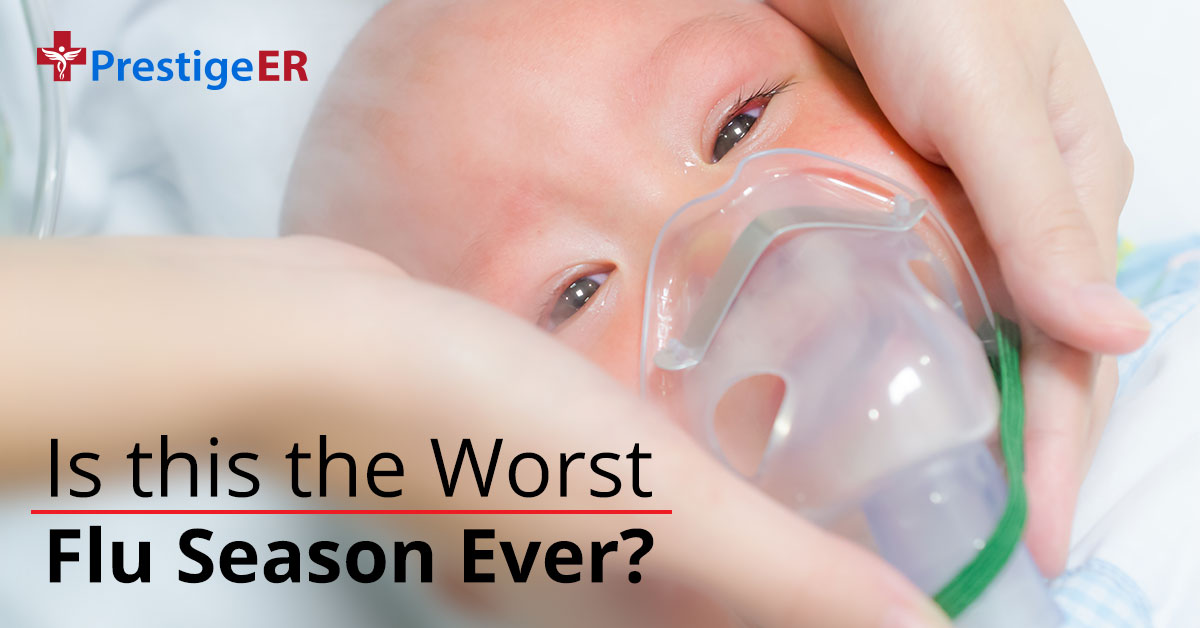 Deadlier than the Swine Flu

Is this the Worst Flu Season Ever?

This season’s most widespread flu strain, H3N2, is more deadly than the swine flu according to CNBC. This could very be the worst flu season in history.

While national organizations are calling for the development of a vaccine for the dangerous H3N2, known as influenza A, Prestige ER warns our communities that we must be prepared.
The best way to begin to prepare ourselves is getting informed and taking the necessary steps to fight this flu season. One of the ways is to take a flu shot. However, many are asking why if they took the flu shot, are they still getting sick?

Why Are the Flu Shots Not As Effective?

The Influenza A, or the “Aussie Flu” which flourishes in both human and pig populations, evolved from the “Asian Flu” H2N2 and has been gathering strength ever since. Viruses evolve which means that they mutate and become stronger. While the medical experts develop more potent and effective flu shots, the viruses adapt to their new enemy and learn how to fight it off best. To make matters more complicated, the FDA requires that flu vaccines must be grown and eggs and apparently the influenza A virus grows “poorly in eggs, making it difficult to obtain candidate vaccine viruses.”
Once we have the new and improved vaccine, according to the CDC, it takes a minimum of six months to create the vaccine in large quantities and have enough available for the public.  While we allow the medical experts to concoct the new flu shot, there are also other challenges to faces beside tightly packed hospitals.

A shortage of supplies of IV saline and amino acids creates additional stress on hospitals during Flu Season. As the country’s biggest supplier in Puerto Rico received a hit during Hurricane Maria last year, doctors and nurses are low on the vital hydration source so necessary to treat flu symptom complication victims. According to the CNBC News, some hospitals are resorting to unconventional alternatives such as Gatorade in order to properly hydrate their weakened patients.
While this may or may not be worst flu season ever, we all have a role to play in helping fight the flu season.

Prevent the Spread of the Deadly Influenza Virus in Dallas

We may not know if we are near the peak of the flu season or not, we can know that we need to protect ourselves and do our part to minimize the spread of the flu season.
Advice From the Medical Experts in Three Easy Steps:

Most Common Complications from the Flu

When You Should Visit Prestige ER

65-year-olds
Our immune systems weaken with age, and people who are 65 or older often develop long-term health problems like heart disease, and COPD, which increases their risk of developing complications from the influenza virus.
People with the flu who are 65 and older should seek immediate emergency medical assistance if they experience the following:

Pregnant Women
Pregnancy brings about many changes in a woman’s body, some of which can weaken the immune system, and affect the heart and lungs putting them at risk of developing complications from the flu.
Women with the flu who are pregnant or have given birth within two weeks should come into our emergency room the moment they experience any of the following symptoms:

Children and Infants
The immune system in children under the age of 5 is not fully developed yet, putting them at risk of developing serious complications from the flu virus compared to adults.
If your child shows any of the following signs please rush him to Prestige ER immediately:

At Prestige ER we are fully equipped to diagnose and treat anyone showing the typical symptoms of the influenza virus, as well as those who have developed complications. Our in-house certified laboratory and extensive diagnostic equipment will provide quick and accurate results, allowing our emergency doctors to begin lifesaving treatment immediately.
We are available 24/7 because an accident or illness complication can happen at any time. Do not risk your health for not getting help from the ER experts, visit us immediately on 7940 Custer Road Plano, Texas 75025.
Find the ER Specialists at prestigeer.org, We provide the Best 24 HR. Emergency Medical Services in Plano. Don’t Wait in Line for ER Care!
Get back on track to enjoying life, FAST! Experienced, Effective and Caring Emergency Physicians team up with the best On-Site ER care for everything from Minor to Major Injuries and Conditions.